Does The Cybertruck Have A Hitch? (Realtime Payload Response) 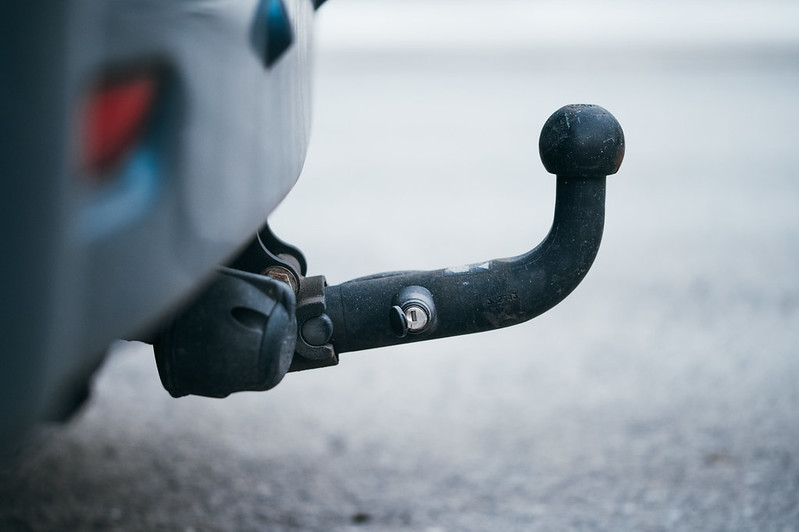 Photo by Ivan Radic licensed under CC BY 2.0. We may collect a share of sales or other compensation from the links on this page.

While the prototypes have been spotted sporting a hitch, we are still waiting to see the final details. For me though, the most intriguing matter is whether the Cybertruck will take the lead in towing capacity with its tri-motor model.

Will the Cybertruck Have a Hitch?

While the Cybertruck has been spotted with a hitch on prototypes, the final details are still not entirely confirmed. While it has been widely announced that the Cybertruck will have impressive towing capabilities, it is not clear yet if it will come with a fifth-wheel towing hitch or whether it will have the clearance to install an aftermarket hitch instead.

What Is the Cyber Hitch?

The Cyber Hitch was designed by Glenn Burns, a retired aerospace machinist, and designer who worked for the space shuttle. The non-intrusive 5th Wheel Hitch is actually not a new idea and has been tested for over 20 years. Its specs include a 6” diameter coupler with a 2” King Pin.

See also  Does The Tesla Cybertruck Have Heated Seats?

Burns hopes the Cyber Hitch will have smart sensors that the driver can access on the Cybertruck’s display showing important information for towing. He has already created some mockups. The flush mount design aims to make it easy to move the hitch when it is not in use.

However, there have been some comments that the Cybertruck may need some kind of sub-structure underneath the bed to be able to accommodate this as the Cybertruck has an exoskeleton design rather than a traditional frame that could attach the Cyber Hitch to.

What Will Cybertruck’s Towing Capacities Be?

Although the figures we have are looking impressive, there are other factors that will affect its towing capabilities. Road conditions can affect the towing capabilities, as well as, the speed of the vehicle and even the shape of the trailer.

It is also important to note that towing will affect the vehicle’s range. Some have suggested that the range of the Cybertruck could see as much as a 50% reduction in its 500-mile range for serious towing.

See also  Does The Cybertruck Have Solar Panels?

How Will Cybertruck’s Towing Capacity Compare to Other Electric Vehicles?

The Cybertruck’s towing capability considering it is expected to be classed as a 2b medium-duty pickup truck is pretty impressive, even compared with gasoline-powered vehicles. If you look at other Tesla models, the Model X has a towing capacity of 5,000lbs whereas the Model Y has just 3,500lbs.

If we look at the Audi E-Tron, it boasts 4,000lbs while the Nissan Leaf only 1,500lbs.  There is no doubt that the Cybertruck will pack a punch.

How Will Cybertruck’s Towing Capacity Compare to Other Electric Vehicles?

Gasoline-powered vehicles generally have better towing capabilities compared to their electric-powered counterparts, but the Tesla Cybertruck is likely to be some serious competition.

If we look at the Ford F-150, which is not only the best-selling vehicle in the U.S. but also the most popular pickup on the market currently, it has a towing capacity of between 5,000lbs and 11,300lbs which would fall into a similar category to the dual-motor model of the Cybertruck.

If we take the Toyota Tundra, the base-model Tundra is rated for 8,300lbs of towing capability which is more than the Cybertruck’s base model of 7,500lbs. However, if we look at the top models, the highest Tundra tow rating is 12,000lbs, which is currently the industry’s leader.

On the other hand, the Cybertruck’s tri-motor model is expected to have 14,000lbs, which could mean that the Toyota Tundra could be booted off the top spot once the Cybertruck goes into production.

Elon Musk announced in 2020 that the Cybertruck would have a “payload and towing calculator” which will show real-time data that will help drivers better understand what their vehicle can handle when pulling an extra load, showing how it will affect the vehicle and its driving experience. The calculator will enable drivers to better navigate turns, braking, and parking, ensuring driver safety when carrying extra loads.

See also  Can a Tesla Jump Start Another Car? (Or Vice Versa)

According to Musk, it will show real-time data on maximum accelerating and braking, cornering, speed on a gradient, and range. It will factor in route elevation changes, cargo mass, and drag impact.

It is clear that Tesla Cybertruck’s towing capability is pretty impressive but we are still not sure what the towing hardware will be. While hitches have been seen on prototype vehicles, whether the commercial vehicles will come with fifth-wheel towing hitches as standard or as an upgrade is not yet known.

There are already plenty of third-party hitch designs being developed, including the Cyber Hitch. Regardless of the intricacies, the tri-model motor Cybertruck does look like it could topple the current leader, the Toyota Tundra and that will be something to watch out for.