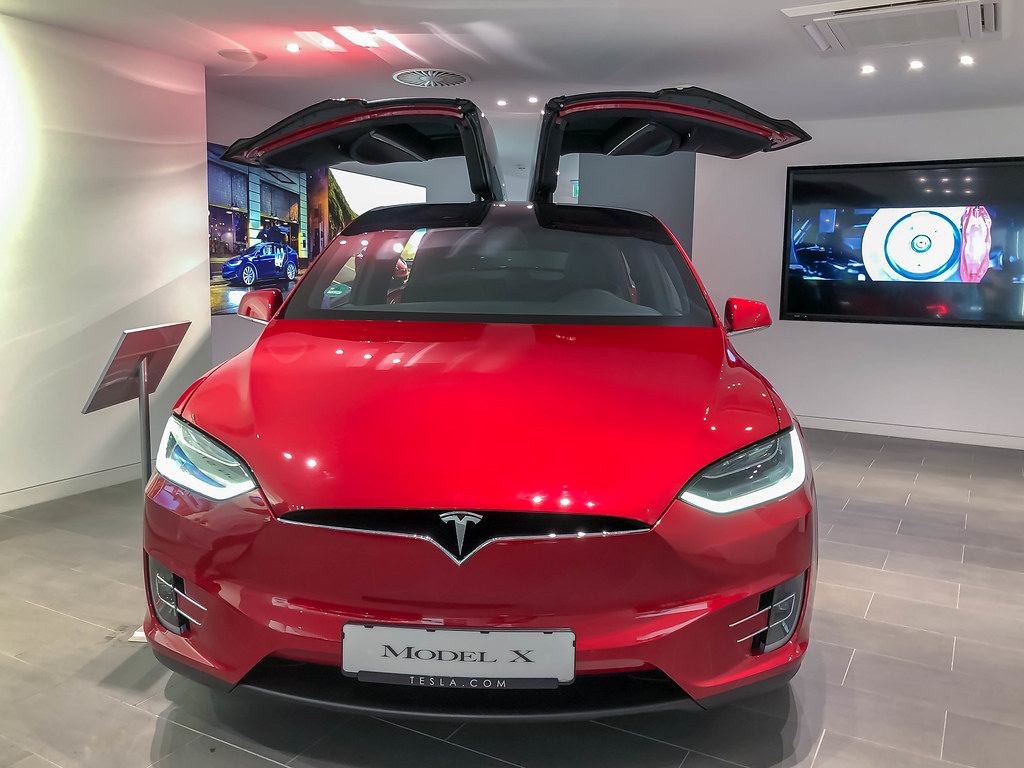 Photo by Marco Verch licensed under CC BY 2.0. Rechargd.com is reader supported. We may collect a share of sales or other compensation from the links on this page. As an Amazon Associate, we earn from qualifying purchases.

On checking the internet, one of the biggest questions repeatedly asked about the Tesla Model X is not to do with its range, accessories, or even cost. It’s to do with the unique rear passenger door design and whether or not they can be opened in tight spaces without damaging the doors themselves or any surrounding vehicles or obstacles.

Well, the good news is that the rear passenger doors on a Tesla Model X are double-hinged. That is why they are called falcon-wing doors instead of gullwing doors. They have sensors on them that control how they open, and they can open in different ways depending on how much clearance they have both vertically and horizontally.

How do the rear falcon-wing passenger doors on a Tesla Model X work?

Unlike traditional gullwing doors that were invented by the car-design genius Jean Bugatti. Who developed them for the 1939 Type 64, and first appeared on the Mercedes-Benz 200SL race car in 1952, and later introduced to the vehicle road-legal version in 1954 or the ill-fated DeLorean DMC-12 that swang opens in an outward motion.

The Model X rear passenger falcon-wing doors are actuated on two hinges. The design consideration of being double-hinged allows them to open with less clearance (horizontal and vertical) than would otherwise be required.

Along with the double hinges, the doors are also equipped with an ultrasonic sensor, capable of using sonar to see through metal. These sensors allow the Model X to detect distances between the vehicle’s roofline and neighboring obstacles. So allows the falcon-wing doors to dynamically calculate an opening arc that will enable it to open in even the tightest of spaces.

What are the advantages of the Model X Falcon Wing Doors compared to traditional car doors?

The advantage of the rear falcon-wing passenger doors on the Model X compared to the traditional door is the ease with which multiple passengers can hop in and out of the vehicle.

Say, for example, you’re parked close to other cars, then trying to get in or out of the vehicle could be a bit of a squeeze, and you could end up damaging both your vehicle and that of your parked neighbor.

But with the falcon-wing doors on the Tesla Model X, that’s never an issue, as the doors open upward instead of outward, providing better access to the rear rows.

Another area where the doors on the Model X are valuable is elderly passengers, and you can see why. Along with ease of use for passengers of all ages, the falcon-wing doors on the Tesla Model X allow for more effortless loading, which is ideal if you’re trying to load the weekly shopping along with the children.

How easy is it to open and close Falcon Wing Doors?

The falcon-wing doors on the Tesla Model X are easily opened and closed. They can be done so by either pressing a button, using a key fob, using the mobile app, or touching the associated icon on the interior touchscreen. They cannot be opened when the car is moving and can only be opened when the vehicle is in park mode.

The falcon-wing doors on the Tesla Model X are equipped with several sensors that detect the presence of people and objects and, if an object is detected, the door stops moving. The doors may adjust their outward and upward movement based on detected objects to avoid contacting the object. For example, if things like pipes or ducting are detected above Model X, the door’s movement may extend further outward but lower, whereas if an object is detected next to the door, the door may open outward much less.

That’s a great question, but ask yourself if you were a traditional auto manufacturer. Why would you spend a tremendous amount of money developing falcon-wing doors and get a massive headache to overcome the manufacturing issues when you probably don’t believe the market is ready to pay extra money for them?

Standard doors work perfectly fine, and falcon-wing doors would reduce your profitability because, well, your competitors won’t have them, and therefore they would have a lower cost base than you.

So now let’s take another example, assume you are Tesla: you produce an excellent car like the Model S, and you are going to launch an SUV. People naturally expect innovation, change, something new, and you come up with falcon-wing doors that look amazing. Yes, you have to spend a lot of money to engineer them and solve the production challenges they present, but that’s what the market expects from Tesla.