Does The Tesla Cybertruck Have Heated Seats? 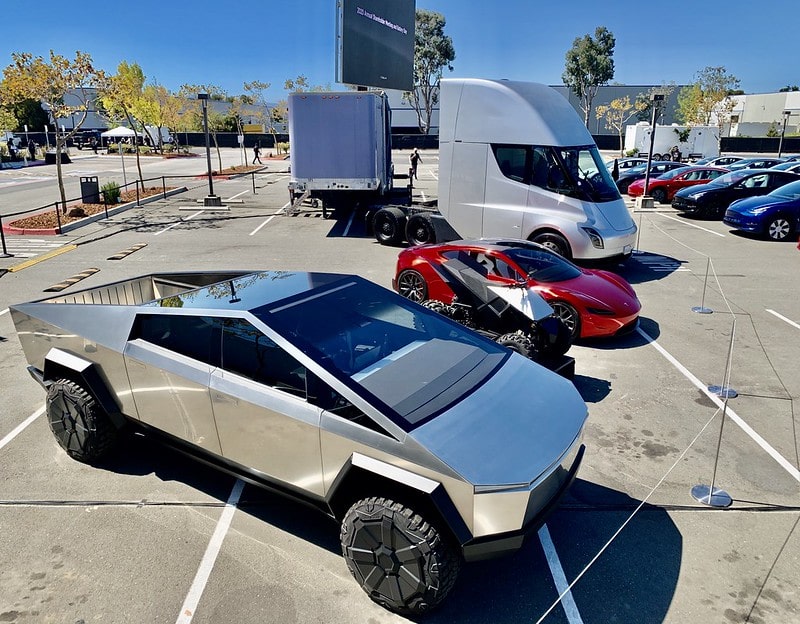 Photo by Steve Jurvetson at licensed under CC BY 2.0. We may collect a share of sales or other compensation from the links on this page.

The heated seats in my car are certainly one of the features I’m glad to have opted for when the weather turns chilly. Such features are increasingly common in modern vehicles.

The Cybertruck has bench seats, and based on published technical specifications these have neither heating nor cooling capacity. This is unusual, as most Teslas now have heated seats as standard, as well as heated steering wheels.

However, the Cybertruck does have a heat pump which means it will have the same air conditioning and cabin heating capabilities as a Model Y or Model 3.

Does Tesla Have Heated And Cooled Seats?

Teslas have always had heated seats. A new feature announced this year for the Model 3 and Model Y is ventilated (cooled) seats, along with heated windscreen wipers.

Previously, this feature was only available to top-end models but the company has now decided to include these as standard.

This trend of bringing high-end features into standard models is something Tesla has been doing for some time.

The heated steering wheel of the Model S is now standard in the Model Y and Model 3, for example. All of these controls can be activated from the cars’ climate control panels.

Does The Cybertruck Have Air Conditioning?

However, it’s important to factor in the effects of cooling on the range. The Cybertruck has the longest range of any Tesla (500 miles), however, cabin cooling can reduce EV range by a third. That said, there are mixed reports concerning the effects of AC on the EV range.

A heat pump is the most efficient form of cooling and heating. This means that the effect of AC on the range will be less in a Cybertruck than say a Model S.

So driving the Cybertruck with the AC on could in theory reduce range down to about 333 miles, but is not likely to be as much as this.

Do Teslas Have Heated Steering Wheels?

However, if driving an older model a third-party steering wheel may still require some sort of software activation via Tesla.

Do Teslas Have Massage Seats?

Massage seats are available as a module for Tesla Model 3 and Model Y. The air bladder used to create the massage effect is already built into the seats of these models. However, owners must pay an extra fee to get the massage module activated which is currently in the region of $200.

Do Teslas Have Heated Wipers?

As of this year, all Tesla Model 3 and Model Y sold will include heated windscreen wipers. The control for the heated wipers is next to the steering wheel. However, the heated part is not the wiper itself but the area of the windscreen where the wiper is situated.

How Do You Turn On Rear Heated Seats In A Tesla?

The heated back seats of a Tesla are switched on either through voice activation or from the car’s climate control menu. From voice control, it’s simply a case of saying “turn on the rear heated seats”.

From the climate control, the control for the rear heated seats can be found by going to the fan icon (bottom of the screen) to show the aerial view of the car, and then by touching once on each back seat. Other heating levels can be chosen by tapping the seats a second or third time.

Does The Cybertruck Have a Sunroof?

The Cybertruck has a large panromantic sunroof that spans the top of the large cabin. The sunroof is so large that the Cybertruck can almost be considered a convertible (cabriolet).

The glass of the sunroof is transparent armor glass, meaning that the large glass roof is not a weak spot when it comes to the bulletproof capacities of the truck.

What Are The Cool Features Of The Cybertruck?

As well as its tough exoskeleton, the Cybertruck is also the first EV ever to come with a three-motor version. As with all Teslas, the Cybertruck comes with self-driving capabilities. The truck has the largest infotainment system of any Tesla, and therefore comes with features such as a 17″ horizontal display, smart summon, karaoke, and Netflix.

The Cybertruck also comes with incredible hauling capabilities and the highest range of any EV to date due to the large battery and use of the latest battery cell technology.

See also  Can You Do A Burnout In A Tesla Model 3?

The Cybertruck’s novel dynamic suspension is also claimed to give it off-road capabilities like no other truck.

Will You Be Able To Sleep In a Cybertruck?

The 2nd row of seats in the Cybertruck folds down to give a space for putting down sleeping equipment for two adults. The Cyberlandr camper which is available as an add-on has two reclining office chairs which recline back fully to make a queen-size double bed.

With the Cyberlandr, you can therefore sleep in the Cybertruck without any additional sleeping equipment (except perhaps a sleeping bag).

Will a Cybertruck Float?

Tesla reports that the Cybertruck will float for short periods of time, though for how long exactly isn’t stated in the vehicle specifications. Its ability to float is in part due to the hermetically sealed battery pack making it resistant to flooding, even under water.

Other Teslas such as the Model S can also operate as a boat for short periods of time, with thrust possible simply by rotating the wheels as if on the road.

However, Tesla does not recommend taking any Tesla onto the water for long periods of time.