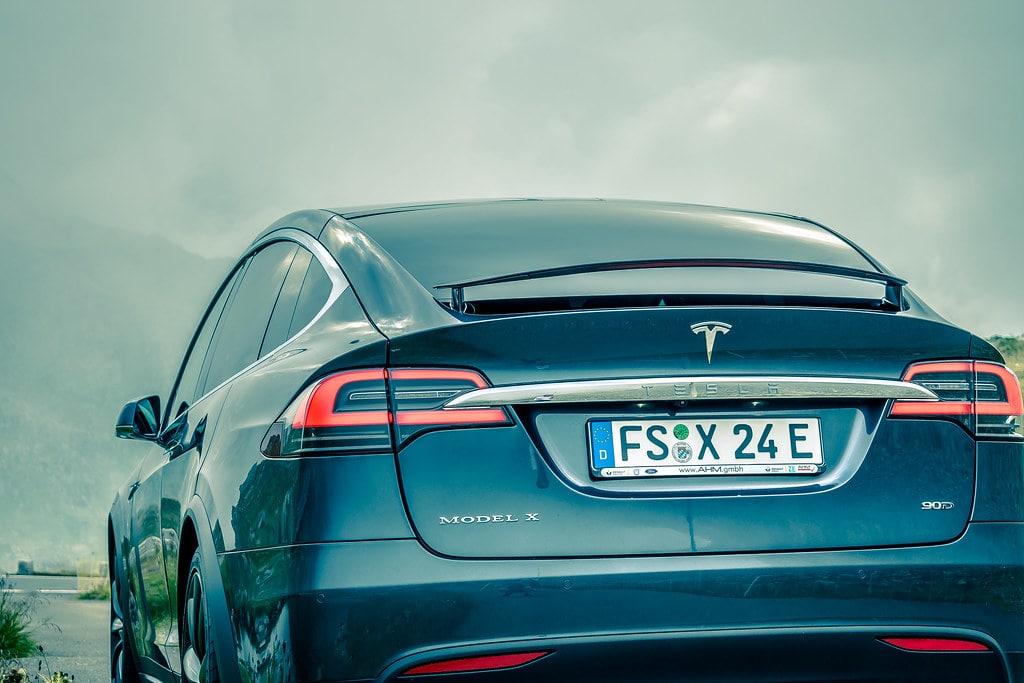 Photo by Jakob Härter licensed under CC BY-SA 2.0. Rechargd.com is reader supported. We may collect a share of sales or other compensation from the links on this page. As an Amazon Associate, we earn from qualifying purchases.

Probably best known for being associated with the Lotus Formula One racing team back in the late ’60s. The active rear spoiler or wing as it was originally called at the time has probably done more for introducing carbon fiber and for creating a thriving global body kit manufacturing industry than perhaps any other recent automotive development.

Initially developed for the Tesla Model X to improve the vehicle’s overall aerodynamics and help create better road traction, the active (or moving) rear spoiler was originally supposed to be a limited edition feature for the Performance Model X, but it was also installed on some non-performance for a short time. However, for various reasons, in 2017, Tesla decided to drop the active spoiler and replace it with a fixed rear carbon fiber spoiler.

When was the First Spoiler introduced?

The first spoiler to be introduced and featured on a race car was the 1961 Ferrari 196 Dino SP, designed by the Italian engineer Medadro Fantuzzi, the renowned coachbuilder who was responsible for some of the most beautifully styled race cars in the 1950s and early 1960s.

What was the first production Car to feature a Rear Spoiler?

The 1967 Dodge Charger was the first time a rear spoiler appeared on a production vehicle, and while the spoiler really didn’t do a great deal to help with the overall aerodynamics of the car. However, Dodge continued to pursue the idea of improving the aerodynamics of their production cars with the inclusion of a rear spoiler, and the technology would be seen again later in 1969 with the launch of the new Dodge Charger Daytona.

Another early example of production cars that came with a rear spoiler was the Shelby “Little Red” GT 500 prototype when it was unveiled in 1967, and then later with the Shelby GT 350 and GT 500

How do Spoilers Work?

Typically made from carbon fibre or other lightweight, durable materials, the idea of a spoiler is to ‘spoil’ or change the airflow above, around, and underneath vehicles to reduce wind resistance (or drag).

Think of it this way: the faster a car travels, the more the air gets underneath it, creating lift, which reduces the grip. So not only does the vehicle become less stable, it means the engine has to work harder to maintain speed.

Adding a front spoiler helps reduce the amount of air going under the vehicle while at the rear, where the airflow tends to be more turbulent and generates more lift, the spoiler helps create more downforce and keep the car firmly planted on the road.

A well-engineered rear spoiler acts like the upside-down wing of an aircraft to produce downforce instead of a lift. Some of today’s hugely expensive performance models come with noticeable rear spoilers or wings perched on their back end. That doesn’t necessarily mean the car is more aerodynamic or can go faster than those without such a feature.

How does/did the Active Rear Spoiler on a Model X work?

What was the reason for Tesla dropping the active rear spoiler on the Model X?

There are probably several good reasons as to why Tesla dropped the active rear spoiler on the Model X, and if we were to hazard a guess, we would put it down to efficiency and cost.

Along with its weight, the Model X also has a low and balanced center of gravity, meaning almost by default; it tends to hug the road. Coupled with this, the electric powertrain of two electric motors—one at the front axle and one at the rear—enables all-wheel-drive capability, which means it delivers incredibly smooth full torque and better traction from a standstill.

Controlling the power in poor driving conditions is extremely easy; just a delicate touch on the accelerator pedal, and the car starts to ease forward slowly.

The excellent efficiency of the Model X is probably one of the main reasons why Tesla decided to drop the active rear spoiler. The other is, of course, the cost.

For every feature or component that Tesla adds to the Model X, there is an inherent cost that may overshadow the benefit to the car and functionality in the grand scheme of things, and this, in our opinion, could be another reason why Tesla decided to drop the active or movable rear spoiler on the Model X and stick with a fixed rear spoiler.