Why Don’t Electric Cars Have Alternators? (& What they Have Instead) 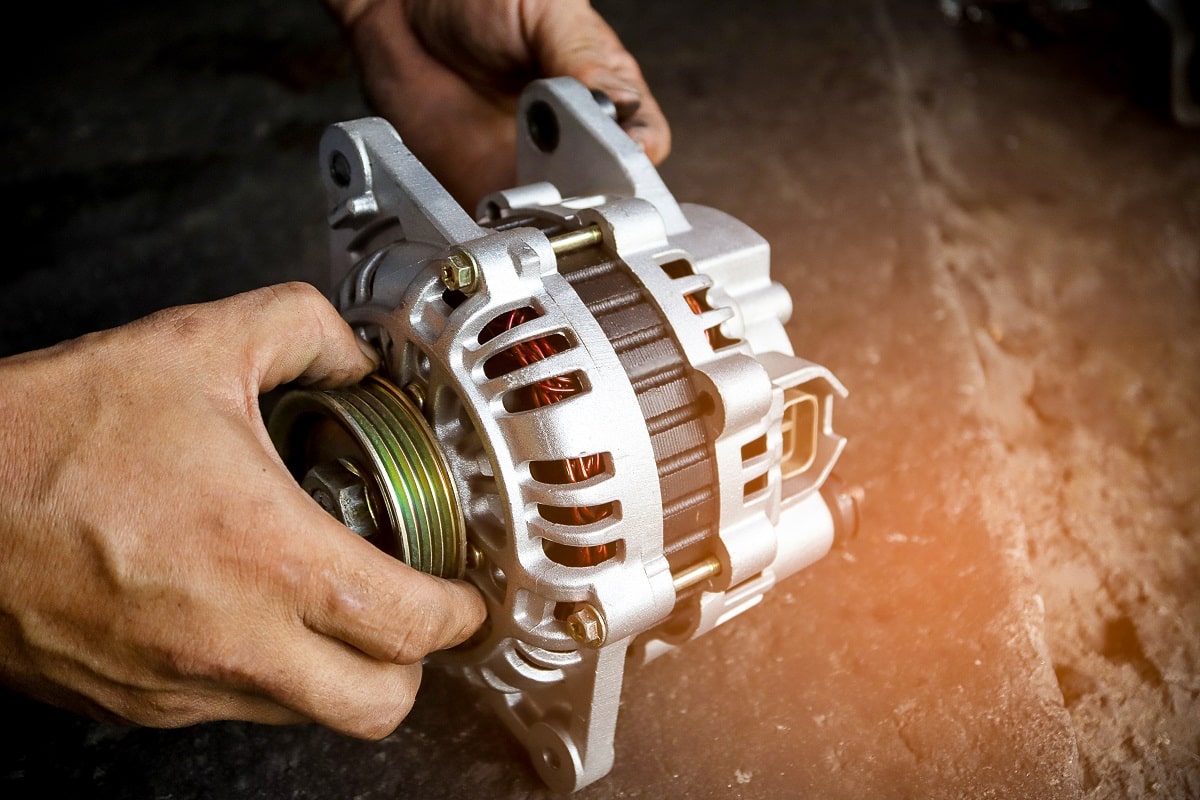 As a keen amateur mechanic, I know the first thing to check after the battery if your ICE-powered car won’t start is the alternator. I guess if you’re in an EV you might think of doing the same thing.

What Is An Alternator?

The electromagnetic field created between the electrified coil and the surrounding magnet causes the coil to rotate to produce rotational or mechanical energy.

In an alternator, the same principle is applied but in reverse. The rotation of the engine rotates the electrical coil to produce an electromagnetic field. This produces electricity at the output of the alternator which can be used.

In an ICE, the AC electrical energy produced by the alternator is converted to DC via a diode bridge. This is necessary for running the car’s electrical system which uses DC rather than AC.

Any additional electrical energy needed by the car is pulled from the 12V battery which is continually charged by the alternator whenever the engine is running.

See also  Do Electric Cars have a Clutch/Manual Transmission?

Why Do Cars Have Them?

Alternators are used in ICEs to provide a source of electricity above and beyond that supplied by the 12V lead-acid battery. Without an alternator, the 12V battery would need to be charged manually.

As well as powering the car starter motor, a car alternator ensures that other electrical components such as electric windows and lights have adequate power.

The alternator makes sure that the 12V battery is charged when the car engine is running, and also stabilizes the electricity supply from the battery to ancillary functions.

Why Don’t EVs Have Alternators?

Actually, EVs do have alternators, but they are not used for the same function as in an ICE. Using an alternator in an EV in the same way as an ICE would make no engineering sense. Alternators do not create energy.

They are simply devices for converting energy from one form to another (mechanical to electrical).

In an ICE, this is essential. ICEs have only chemical energy in the form of fuel onboard and the bit of power provided by the 12V battery.

Using an alternator anywhere on an EV would therefore involve unnecessary inefficiencies and added weight. You would be using electricity to create motion to produce electricity. This would be a very inefficient way of doing things.

But You Said EVs Have Alternators?

The only part of an EV with wasted rotational energy is at the wheels when the car is slowing down. EV engineers were aware of this from early on and therefore introduced regenerative braking.

These braking systems harvest waste rotational energy at the wheels during deceleration and convert it back to electrical energy which can be sent back to the battery. This reduces the motor energy demands on the power pack to increase car range and is done so using the drive wheel motor.

As well as helping to slow the car, this creates electricity which is sent back to the battery for a bit of charge. As mentioned previously, an alternator is simply a motor working “backwards” so to speak to create electricity from rotational energy rather than the other way around.

In this sense, the drive wheel motor acts as an alternator when regenerative braking is applied. However, an EV motor is multiple times larger than a classic car alternator.

Regenerative braking is only activated when the car is slowing. Otherwise, the car would slow down when you wanted it to speed up.

What About Power Conversions?

An alternator could be used in an EV to convert electrical power from one voltage to another, or from one current to another. This is another application of alternators. However, other devices such as DC-DC converters can do the same job with higher efficiency and less weight.

These converters are used in EVs for exactly this purpose. They reduce the voltage from the power pack to ensure that ancillary equipment such as heating and lighting are not damaged by excessive power. In addition, the 12V battery in an EV still needs charging.

This is also done with a DC-DC convertor, as the voltage directly from the power pack would otherwise be too high.

Can You Put An Alternator In An EV?

There isn’t really any practical application for an alternator in an EV. An alternator relies on either rotational energy or electrical energy to produce electricity. But in doing so it introduces some of the highest energy inefficiencies of any vehicle component.

The only rotational energy in an EV is at the axle, and all of this energy is needed to move the car forward. Using any of this rotational energy to run an alternator would slow the car down and introduce considerable energy inefficiencies.

Also, an EV has plenty of electrical energy readily available from the battery, making an alternator defunct. Any changes in voltage needed from the battery can be achieved using a DC-DC convertor.

Do Hybrid Vehicles Have Alternators?

A hybrid vehicle has a small electric battery which can be used when the use of the ICE is inefficient, such as when the car is sitting at traffic lights or pulling away. A traditional hybrid vehicle charges this battery from the engine.

Can EVs Charge Themselves?

Yes, there are methods for building an EV that charges itself whilst driving. However, the electricity produced to charge a second battery would be less than the electricity used from the primary battery. It would make no energetic sense and therefore isn’t something that is used.

I’ve seen people put on an alternator on an EV

Amateur mechanics have put alternators on various vehicle axles including those of EVs. These will harvest energy and produce electricity.

See also  Can a Tesla Tow A Trailer? (Yes, Here's How)

However, the use of an alternator in this way will create friction at the axle and increase the load on the EV battery. Given the inefficiencies of an alternator, this results in a net loss of electrical energy and isn’t something you will ever see on commercial EVs.