How Do Electric Car ACs Cool The Interior? 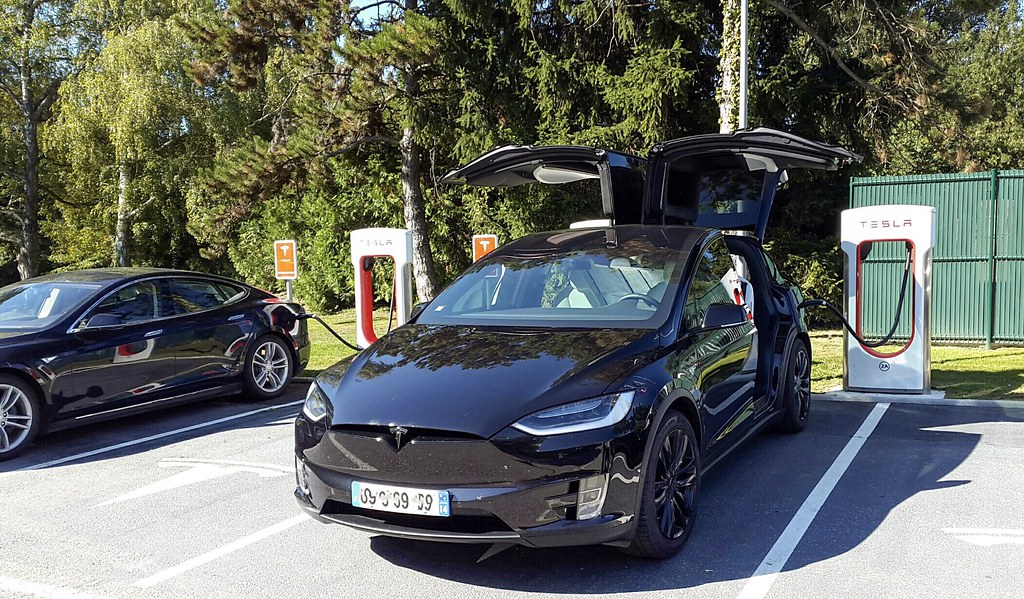 Living in a Mediterranean climate, I can’t live without my car’s AC. So thought I would look into it in more depth and see how this compares to the AC systems in EVs

Electric car ACs cool the interior in the same way as an installed home AC unit works. It’s also the same as the AC system in an ICE, except the AC compressor is powered by electricity from the EV battery rather than from the rotation of the engine as in the case of an ICE.

AC stands for “air conditioning”, but it would be more accurately described as air cooling. AC units in the home are used when temperatures are above those comfortable for the human body by providing a flow of cool air and removing hot air.

They do this by utilizing the endothermicity of certain fluids when the fluids change phase from a liquid to a gas. Endothermicity is simply the use of surrounding heat to allow a change of phase or a chemical reaction to take place.

How Does AC work?

You can often hear this noise from a fridge, as it may manifest as gentle vibration or humming. The refrigerant in liquid form is passed from the fridge’s exterior to the interior. The warmth inside the fridge is absorbed by the liquid refrigerant as it transitions from the liquid to the gas phase.

When a substance transitions from a liquid to a gas, it expands and absorbs heat from its surroundings. A home AC unit simply blows this cool air into the home rather than leaving it to sit in one place.

This process takes place about 4 times per hour depending on how hot the outside of the fridge is and what setting the fridge is on. In the home, this is done by passing the refrigerant to the outside of the building via pipes. Here the heat is emitted into the atmosphere and the liquid is compressed. This is why home AC units have an external part and an internal part, and why holes need to be drilled into the external walls.

How Does This Work In A Car?

The only difference between a home AC unit and a car AC unit is the source of the power to the compressor. In the home, it is usually supplied by electricity from the mains.

Is AC The Same In An EV As An ICE?

Yes, EV AC units work in the same way. However, they bear slightly more similarity to a home AC unit than an ICE AC unit.

This is because the AC compressor in an EV is powered directly by the electricity from the car power pack. In an ICE, the compressor is powered by the rotation of the engine’s camshaft rotating whilst the engine is running.

The other difference between all of these different AC systems is the refrigerant. In ICEs and some EVs, the refrigerant is a compound known as R134a. In EVs, manufacturers have often opted for more novel materials such as ethylene glycol.

This is the same substance as anti-freeze used to remove ice from car windscreens. It is higher cost than R134a, but safer and more environmentally friendly.

AC vs Heat Pumps in EVs

Some higher-end EVs such as the Tesla Model X are now built with heat pumps. These are a little more complex than an AC unit and provide both hot and cold air.

Heat pumps use the temperature differential between the inside and outside of the car to produce hot or cold air. They are more expensive to build, but provide significant reductions in energy demands and therefore help to increase EV range.

The AC in an EV is more integral to the car’s operation than it is in an ICE. This is because the AC in an EV is used to keep the battery cool as well as the cabin. This is important to consider with respect to repairing a broken AC unit.

If the AC unit in an EV breaks down, you don’t have the option to leave it unrepaired. This will cause operational problems and reduce the lifespan of the battery. This is unlike ICEs, where many older second-hand ICEs will be sold with a broken AC unit without any problem. The cost of repairing the AC unit in an EV can be very high.

The AC in an EV is part of the car’s Heating, Ventilation, and Cooling system (or HVAC for short). The criticality of temperature to car functioning is much higher in an EV than in an ICE due to the importance of battery and motor temperature.

Companies such as Tesla do testing in temperature tunnels from -20 degrees to +40 degrees celsius to see how effective their HVAC systems are. The testing involves measuring the temperature at various points on the car including under the bonnet and in the cabin.

Because of the criticality of EV functioning, the AC unit in an EV is always active and can be activated to cool the cabin at any time. This is unlike an ICE where the AC is deactivated by default. This can be used for car pre-conditioning if temperatures outside are high.

EVs such as Tesla also has overheat protection which makes sure that the temperature of the car’s interior never goes above a certain level. This is useful if you leave the car parked outside in high temperatures.

How AC in Teslas Work?

Tesla states that its AC system is much like that of a domestic fridge’s internal workings. However, the AC unit in a Tesla runs off 400V rather than the 220V of a domestic fridge. The Tesla AC system comprises an electronic compressor, a condenser, expansion valve, evaporator, and drier.

This is all contained within the cooling unit, which produces cool air and blows it into the cabin. Teslas have a unique cabin vent design that allows uniform distribution of cold or hot air throughout the cabin.

See also  What Potential Problems Could Arise With An Electric Car?

This is done by the vents on either side crossing over one another along the front of the dashboard. This creates a smoother stream of air, reduced buffeting, and ensures you don’t get too cold.

The Future Of EV AC

An EU research project has explored ways of keeping EVs cool that don’t use the same system as a home AC unit or fridge. The research has explored the use of desiccant and membranes to implement car cooling, heating, and dehumidification.

The desiccant and membrane capture moisture in the air and allow dryer air to be circulated in the vehicle cabin. Dryer air requires less energy to heat or cool, thus reducing the energy demands of cabin temperature management.

How The Refrigerant Works

The system still uses a refrigerant to reduce cabin temperature, but the research reports a 50% reduction in total cabin environmental control and a 33% reduction in air cooling energy demands. This is in part attributed to a brushless motor used for circulation of refrigerant developed as part of the research which is 85-95% efficient.

The system can be used for both ICEs and EVs making it a possible candidate for all future car designs. However, the system components required to incorporate the technology into vehicles are probably prohibitive for commercial vehicles at the present time.

Refrigerants used in domestic refrigerators and home AC units have had a long history of environmental implications. Not least in this was the realization in the 1990s that common refrigerants known as CFCs were contributing to damage to the earth’s ozone layer leading to their banning.

See also  Should You Get a Screen Protector For Your Tesla Model 3?

Today, almost all car AC units use R134a refrigerant which is a gas with insignificant ozone-depleting properties. This is a fossil fuel similar to propane, but isn’t burnt in an AC unit so doesn’t contribute to global CO2 emissions. It is also used in two EV models.

Tesla uses a water and ethylene glycol mix rather than R134a. This is more expensive, but operates across a wider range of temperatures and has a longer lifespan. It is more environmentally friendly than the R134a refrigerant used in most ICE AC units.