Where Is The Speedometer on Tesla Model 3? 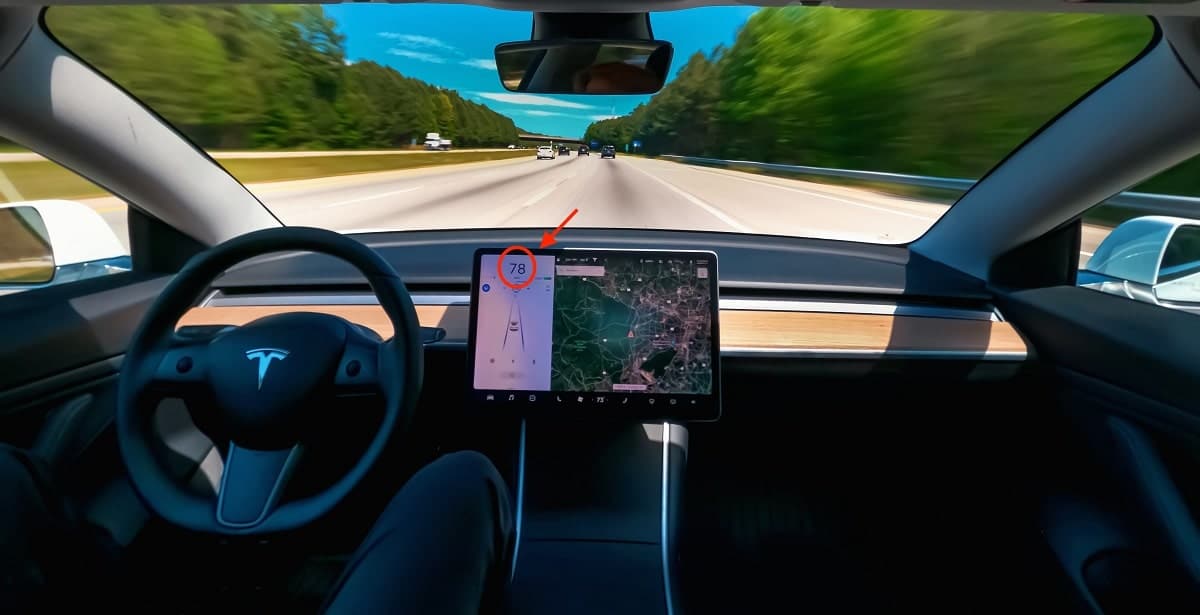 Teslas cars are unique in more ways than one, so when it comes to the standard speedometer dial, in typical Tesla style – it’s not located precisely where you might expect it. So where is it?

The speedometer on a Tesla Model 3 is on the car’s computer console. It can be found in the top left or top right of the console (depending on which side of the car the driver is sitting on).

Why is it here?

This is part of Tesla’s belief that one day we will all be driving autonomous vehicles, and won’t need a speedometer. Drivers say that they get used to the new speedometer without a problem. However, third-party speedometers are available if you want an old-school plastic gauge to show you the speed.

Why Doesn’t A Tesla Have A Conventional Speedometer?

Tesla prides itself on revolutionary design features. Back in 2017, Tesla made it clear that it wanted to give the cabins of its cars a “space-ship type feel”. Removing the speedometer is one of the ways of clearing clutter from the dashboard. It could be possible instead to include a speedometer display on the windscreen or onto a glass panel within the cabin. Tesla has not pursued these ideas owing to cost. The company is always working hard to try and make the cars more rather than less affordable.

Removing the speedometer from the dashboard is also a push toward autonomous driving. Teslas are designed for this end goal. Making the speedometer a secondary part of the car’s functionality is a part of Tesla’s belief that cars in the future will require little if any input from drivers.

How Do Drivers Feel About The Speedometer Position?

Others still like the uncluttered look and don’t find it a problem. In fact, many drivers find the speedometer position to be better than that of a traditional car where the speedometer can be obstructed by the steering wheel.

Some drivers complain that the font of the speedometer in the new model 3 is a lot smaller than in previous versions and wish it was a bit bigger.

Can I Get A Speedometer For A Tesla?

Third-party manufacturers provide after-market speedometers that you can fit on a model 3. These range from $30-$500. However, the cost of fitting such a speedometer at the lower end of this spectrum will require fairly advanced technical skills. It also may make the cabin look a bit ugly.

What Other Clutter-reducing features Are In A Model 3?

Model 3 does not have any air vents in a traditional sense. Two intersecting planes of air are passed into the cabin for vertical air control, and horizontal control is hidden within the dashboard.

Teslas of course do not have physical keys. The cars opened via Bluetooth from your mobile phone.

Many suggest that moving the speedometer away from the dashboard has serious safety implications. US car regulations state clearly that automotive vehicles must have the vehicle’s speed displayed within the eyesight of the driver whilst driving. Putting a speedometer on the central console where the driver has to turn their head to view it is a clear flouting of these regulations.

See also  Will A CyberTruck Fit In Your Garage? (How Big Is It REALLY?)

There are always arguments for form over function, but a car without a conventional speedometer for the sake of aesthetics is a bit like a car without brakes because it makes the car ugly. Looking good is important but so is safety.

Basic safety features such as a speedometer should not be an optional extra. Tesla is always pushing the boundaries, but pre-empting autonomous driving by removing a dedicated speedometer display is perhaps too soon.

It creates a unique aesthetic in the car, but bear in mind that buying a Model 3 means buying a car without a dedicated speedometer.