7 Reasons Why Electric Cars Are So Heavy 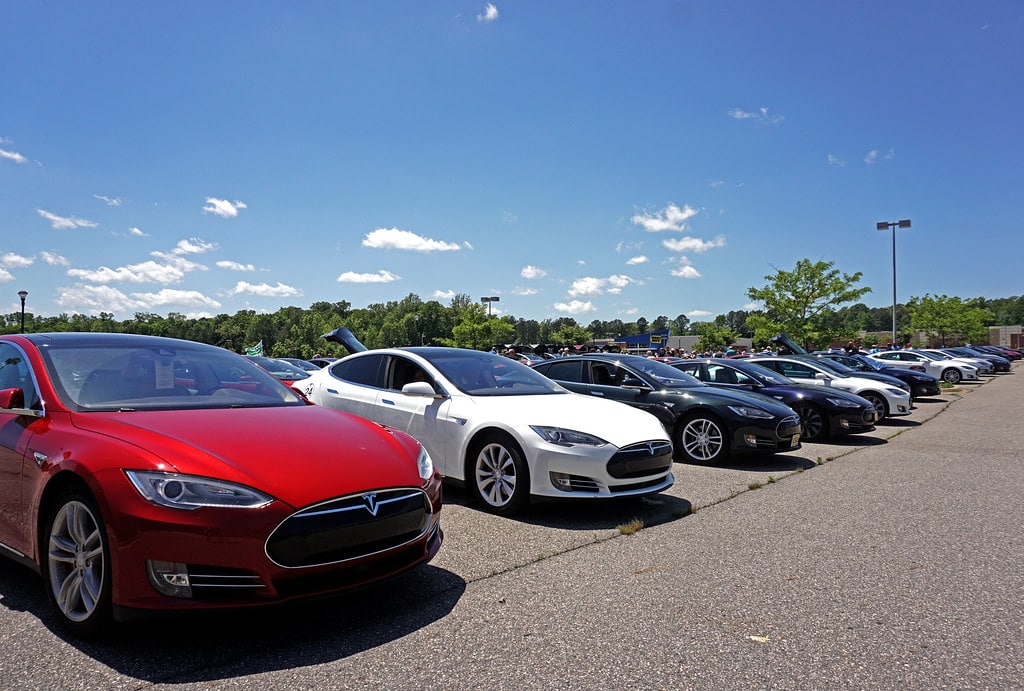 Photo by Nat Johnson at licensed under CC BY 2.0. Rechargd.com is reader supported. We may collect a share of sales or other compensation from the links on this page. As an Amazon Associate, we earn from qualifying purchases.

Want to know why EVs are typically heavier than conventional cars?

The main reason why EVs are so heavy is the size and weight of the battery power pack. Other reasons for the added EV weight are reinforced framework and suspension to manage the heavier car, metal armor surrounding the power pack, luxury features, and extra electronics. As an example, Tesla EVs are typically 17-60% heavier than equivalent ICEs.

EV weight is discussed here under 7 categories. However, as a rule of thumb EV weight can be split three ways. About a third is for the weight of the battery, a third for the motors, suspension, and drivetrain, and another third for the car’s frame, interior, and paneling.

This article discusses EV weight in a bit more detail and uses the 2018 Model S as an example for talking about actual car component weights and their percentage of total car weight.

An EV has much more battery equipment than ICEs. There is the main power pack that drives the wheels as well as the typical small 12V battery used to power ancillary components.

Even in an ICE, the small 12V battery is a significant component of car weight, with some manufacturers opting for slim-line batteries to reduce car weight. But these slim-line versions are expensive.

See also  Can Teslas Be Stolen? Security Vs Other Cars

The power required to induce the movement in EV electric motors is huge. This amount of power can only be achieved by using batteries with high voltage and power. This means that EV batteries need to be very large to make the car move. Of course, as the battery gets heavier so more power is required to transport the battery.

A trade-off is therefore made between battery size and power by manufacturers to ensure that the car is powerful enough without causing the car to become excessively heavy. This decision over battery size also needs to factor in the desired range.

Ultimately EV battery size is decided upon through a process of optimization based on car size and weight, car range, and car power.

Of course, an EV doesn’t have a large combustion engine, which is the main weight of an ICE. EVs also have a small standard 12V battery for powering ancillary components such as lighting and heating.

Tesla power pack batteries are a bit heavier than other manufacturers because Tesla uses lots of small batteries rather than a few large batteries. This was done by Tesla on purpose due to the availability of smaller batteries and provided the added benefit of giving the batteries more channels for cooling. However, it does add a little bit more weight to the battery pack.

As shown in the table above, popular EVs such as Tesla is 17-60% heavier than equivalent ICE cars. An equivalent luxury Sedan such as a BMW 3 series is 7-36% lighter than a Tesla Model S, and a Nissan Juke crossover is 17-20% lighter than a Tesla Model 3. Most of this added weight comes from EV batteries, which overall tend to weigh more than the ICE they serve to replace.

Because EVs are heavier, they require a more robust framework. This means a reinforced chassis and other structural components such as A-pillars and B-pillars (the arches in the center of the car that holds the roof and which the car doors close onto).

Heavier cars always require more robust structural components and car design based on weight is integral to the design of any car.

For example, a 4.5 L Chevrolet Corvette will have a far heavier structure than a 1.2 L Renault Twingo to account for the far heavier engine and the forces imposed on the car at higher speeds.

With EVs, a reinforced frame is a part of powering a car with a heavy battery. This is the case at the current time. Perhaps in the future, someone will develop a battery that requires less metal and fewer liquids, or a battery with better resistance to environmental change and therefore reducing the amount of battery protective material.

This means that three times as much aluminum material can be used as steel for the same overall weight. In a Tesla Model S, the aluminum used for the chassis and body framework is about 350-400kg, or about 17% of the total car weight.

4. Metal Armor Around The Battery To Protect It

The battery in an EV is so big that it requires protective material around it to protect it from impact and environmental change. Damaged batteries can lead to fires or leaked battery materials which are highly corrosive.

The battery also needs to be protected from impact from a safety point of view. This protective metal adds further weight to the weight of the car.

After reports of Teslas catching fire, Tesla was forced to add extra armor to protect the batteries in 2014. Tesla battery armor is made from titanium which is very strong but with a density nearly half that of steel. The Tesla battery armor runs underneath the battery and along the base of the car.

See also  Will The Cybertruck Be Road Legal In Europe? (It Will Need These Changes)

As EVs are generally more expensive than ICE equivalents, EV manufacturers try to incorporate luxury features. This is to draw in the higher end of the market. Such features might include heated components such as seats and steering wheels. These extra components add weight to the car.

EVs wouldn’t be able to function without a great deal of electronic hardware. These include cables, an onboard charger, and various inverters to provide electricity in different forms and levels to name a few. These are not present in a standard ICE, so can be considered an extra weight in an EV.

The weights of EV electric motors are a fraction of ICEs but are still a significant part of EV weight. A typical Tesla motor weighs about 150kg. In AWD EVs, one motor sits at the front and one at the back. The weight of the motors in an AWD is therefore about 300 kg.

The rest of the electronics in a Tesla Model S (wiring, lighting, HVAC, computer, and other electrical parts) total just under 100 kg or less than 4% of the car’s total weight.

EV manufacturers are always looking at ways of stripping down their cars to reduce weight. The 2018 Tesla Model S had over 500 kg of weight stripped out from its interiors by using composite materials rather than conventional car materials.

This was done by partnering with companies that specialize in composite materials. Using these materials reduced the weight of the 2018 Model S by 20%. Today, the interior of a Tesla Model S is 300 kg and accounts for less than 15% of the car’s total weight.

Other features embarked upon by Tesla are the use of novel alloy metals for the wheels, glass roofs, and frameless glass. The alloys used in the wheels not only reduce weight but also reduce rotational mass. This means that braking is more responsive.